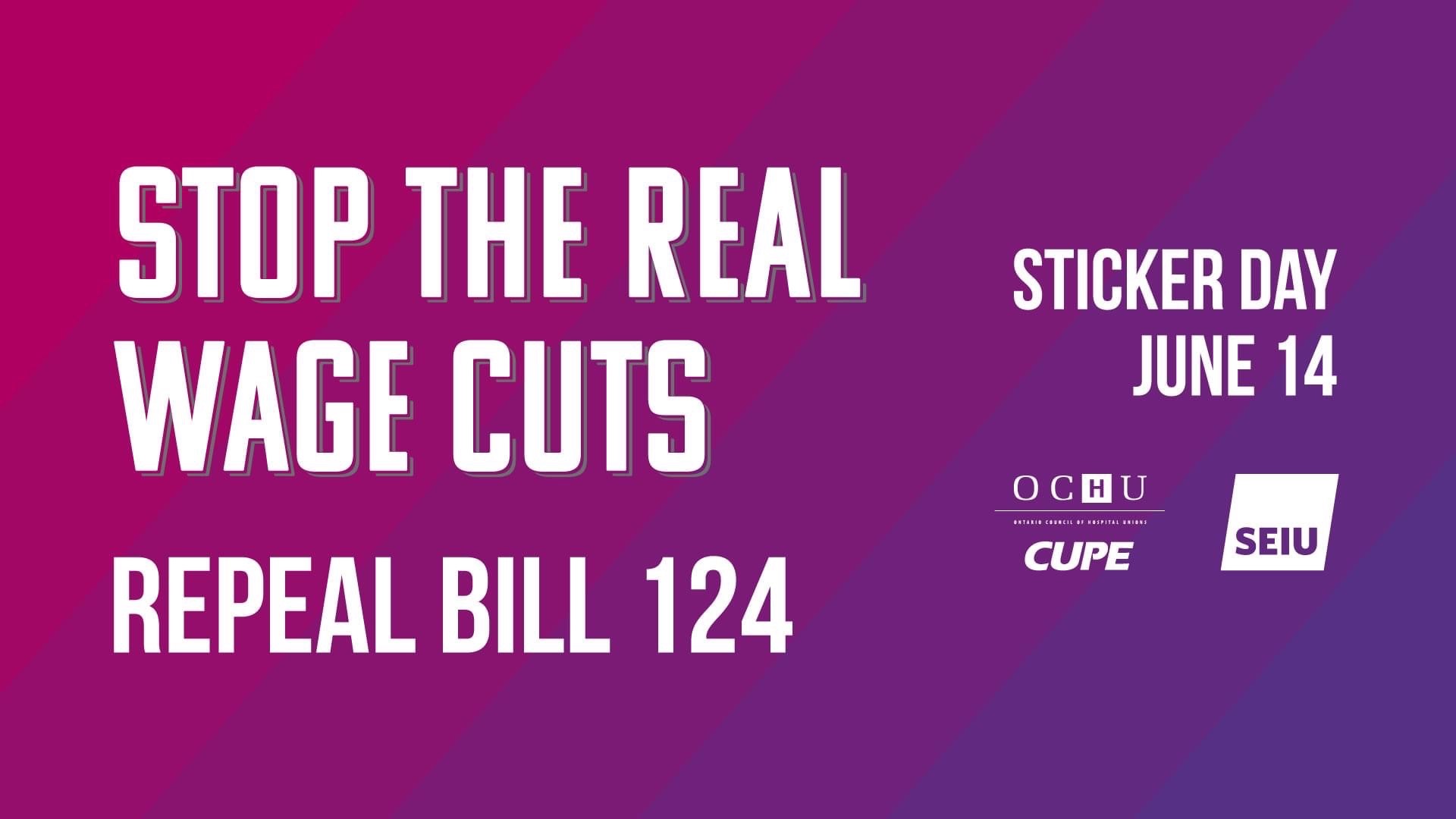 They enter bargaining an exhausted workforce. Many are demoralized by the jarring disconnect between the generous praise that the Doug Ford government gives them publicly – as pandemic heroines – and the stark reality of how it treats them. A legislated wage cap which dooms them to real cuts to wages, emergency orders that take away their workplace rights, pandemic pay for only a fraction of them and continuing challenges protecting themselves and patients from what we know is an airborne transmitted virus. Over 23,000 health care workers have contracted COVID 19 at work and 24 are dead.

OCHU/CUPE and SEIU Healthcare, which together represent nearly 70,000 hospital workers are calling for the repeal of Bill 124 and the right to freely bargain compensation items like wages and benefit improvements.

Bill 124 limits wage increases and total compensation increases, for public sector workers, including hospital staff to no more than 1 per cent a year. Inflation was 2.2 per cent in March 2021 year-over-year and 3.4 per cent in April 2021 (year-over-year).

“Under Bill 124, Ontario’s ‘health care heroes’, predominantly women, will take a real wage cut of 2.4 per cent in the first year of their next contract. In addition to the wage cut, hospital workers can’t bargain access to psychological counselling, even though half of the frontline workforce identifies as in poor mental health or suffering from PTSD because of working endless hours at high risk during the pandemic. We ask the Premier to repeal Bill 124 and to treat the workforce, who stepped up for Ontarians during the COVID19 pandemic, fairly,” says OCHU/CUPE president Michael Hurley.

Ford and his health minister have acknowledged that Ontario already faces a significant shortage of health care staff. Recent CUPE polling and SEIU Healthcare surveying of more than 3009 hospital RPNs found that a high number of them feel devalued by the Ford government and are considering leaving the profession, citing low wages and lack of respect of their skills and nursing competencies.

“Bill 124 was an attempt to handcuff hospital workers at the bargaining table and Bill 254 was an attempt to muzzle their voices. SEIU Healthcare and OCHU are joining forces in bargaining to put up the best fight possible to give registered practical nurses the mental health services they deserve, to give PSWs full-time work, and to increase staffing so our hospitals are safe and clean for everyone who walks its hallways. Our unions are here for respect, for protection, and for the right to bargain fair wages for all hospital workers.” – says SEIU Healthcare President Sharleen Stewart.

The Quebec government just signed a 3-year deal for their public sector workforce, including health care, that increased wages by 2 per cent a year, with 1 per cent lump sums in years 1 and 3.

Hospital sector members will be mobilizing in their communities over the course of the summer beginning today with a province-wide sticker workplace action calling for a repeal of Bill 124 and a virtual provincial rally on Saturday, June 19.