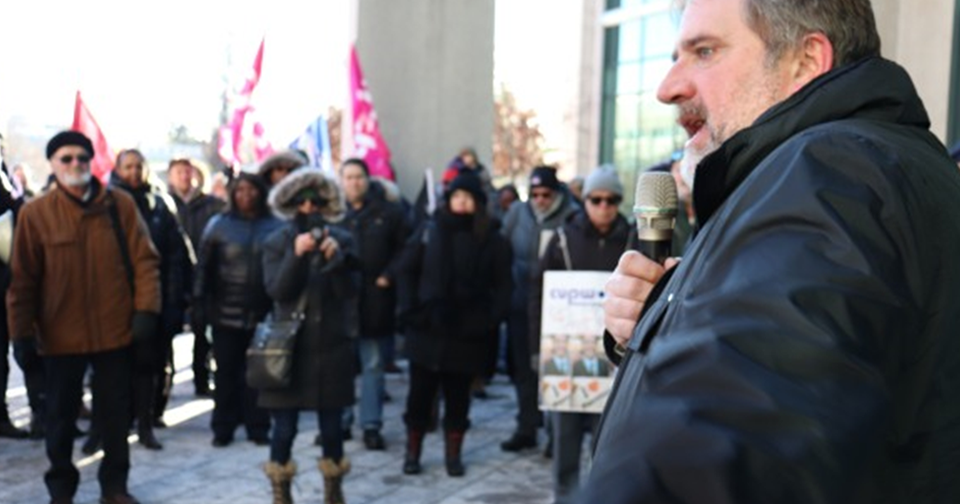 CUPE came out in strong support of postal workers who’ve been forced back to work, rallying in defence of their right to strike and for free collective bargaining at the Canada Post annual public meeting.

Members of CUPE’s National Executive Board joined postal workers and their allies outside the meeting at Canada Post headquarters in Ottawa. The Liberal government legislated members of the Canadian Union of Postal Workers (CUPW) back to work late last month. They’d been on rotating strikes, pressing for progress on key issues including equal pay and safer workplaces.

“CUPW has our full support every step of the way as they fight this attack on the Charter rights of all Canadian workers,” said CUPE National President Mark Hancock. “Justin Trudeau has made it clear he’s no friend of workers. He’ll feel the consequences in the courts – and at the ballot box.”

“The courts have ruled that the right to strike is at the heart of meaningful negotiations. Collective bargaining is how we move forward as workers, and as a society. CUPE’s 665,000 members stand in solidarity with postal workers as they keep pushing for fairness and equity,” said CUPE National Secretary-Treasurer Charles Fleury.

As part of our ongoing support, CUPE has extended CUPW a $1 million interest-free loan. CUPW is challenging the back-to-work legislation in court.